Ancestry.com and The Church of Jesus Christ of Latter-day Saints. 1880 United States Federal Census [database on-line]. Lehi, UT, USA: Ancestry.com Operations Inc, 2010. 1880 U.S. Census Index provided by The Church of Jesus Christ of Latter-day Saints © Copyright 1999 Intellectual Reserve, Inc. All rights reserved. All use is subject to the limited use license and other terms and conditions applicable to this site.Original data: Tenth Census of the United States, 1880. (NARA microfilm publication T9, 1,454 rolls). Records of the Bureau of the Census, Record Group 29. National Archives, Washington, D.C.

The 1880 census is a valuable tool in part because it is the only U. S. census available for the last two decades of the 1800s. Most of the original 1890 population schedules were destroyed in a fire at the Commerce Department in 1921. Less than one percent of the schedules—records enumerating only 6,160 individuals—survived.

Many of these questions, specifically those detailing mental and physical health, can only be found within the original census document. Ancestry.com's image viewer allows you to scan the original document for this valuable data. The age of this data may lead to discoveries about fourth, fifth or even sixth ancestral generations. The depth of this data can offer personal detail lacking in earlier census surveys. The family relationships category can provide information about extended family. If a married daughter has been counted as part of her father's household, her married surname will appear in the census. Questions about health may reveal symptoms of family illnesses that have appeared in later generations.

The 1880 census began on 1 June 1880 for the general population of the United States. The enumeration was to be completed within thirty days, or two weeks for communities with populations of 10,000 or fewer. Regardless of when an individual was contacted, all responses were to reflect the status of the individual as of 1 June 1880, the official Census Day.

Thirty-eight states (including the recently admitted Colorado) were enumerated in the 1880 census, along with eight territories: Arizona, Dakota, Idaho, Montana, New Mexico, Utah, Washington, and Wyoming. Non-organized Alaska was also enumerated, but the "Indian Territory" (now Oklahoma) was not enumerated for non-Indians.

Enumerators (census takers) collected the following information for each household:

The 1880 census was the first to identify an individual’s relation to the head of household. In addition, the 1880 census was the first to identify the state, county, and other subdivisions; the name of the street and house number for urban households; illness or disability at the time the census was taken; marital status; number of months unemployed during the year; and the state or country of birth of every individual’s father and mother.

The material used to create this database comes from four different sources. In certain instances records from individual states were used to reconstruct specific counties.

Provided in association with National Archives and Records Administration
This is a census of the U.S. population as of 01 June 1880. Learn where your ancestors lived, who lived in the household, ages, places of birth, occupation, and more. 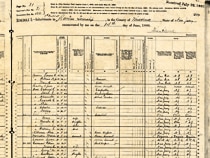 This database is an index to individuals in the United States enumerated in the 1890 special census of Civil War Union veterans and widows of veterans available on microfilm M123 (118 rolls) from the National Archives and Records Administration (NARA). Information listed in this index includes the veteran's name or widow's name, rank, year of enlistment, and year of discharge.

This database is an index to individuals enumerated in the 1900 United States Federal Census, the Twelfth Census of the United States. Census takers recorded many details including each person's name, address, relationship to the head of household, color or race, sex, month and year of birth, age at last birthday, marital status, number of years married, the total number of children born of the mother, the number of those children living, birthplace, birthplace of father and mother, if the individual was foreign born, the year of immigration and the number of years in the United States, the citizenship status of foreign-born individuals over age twenty-one, occupation, and more. Additionally, the names of those listed on the population schedule are linked to actual images of the 1900 Federal Census.

This database is an index to individuals enumerated in the 1870 United States Federal Census, the Ninth Census of the United States. Census takers recorded many details including each person's name, age at last birthday, sex, color; birthplace, occupation, and more. No relationships were shown between members of a household. Additionally, the names of those listed on the population schedule are linked to actual images of the 1870 Federal Census.